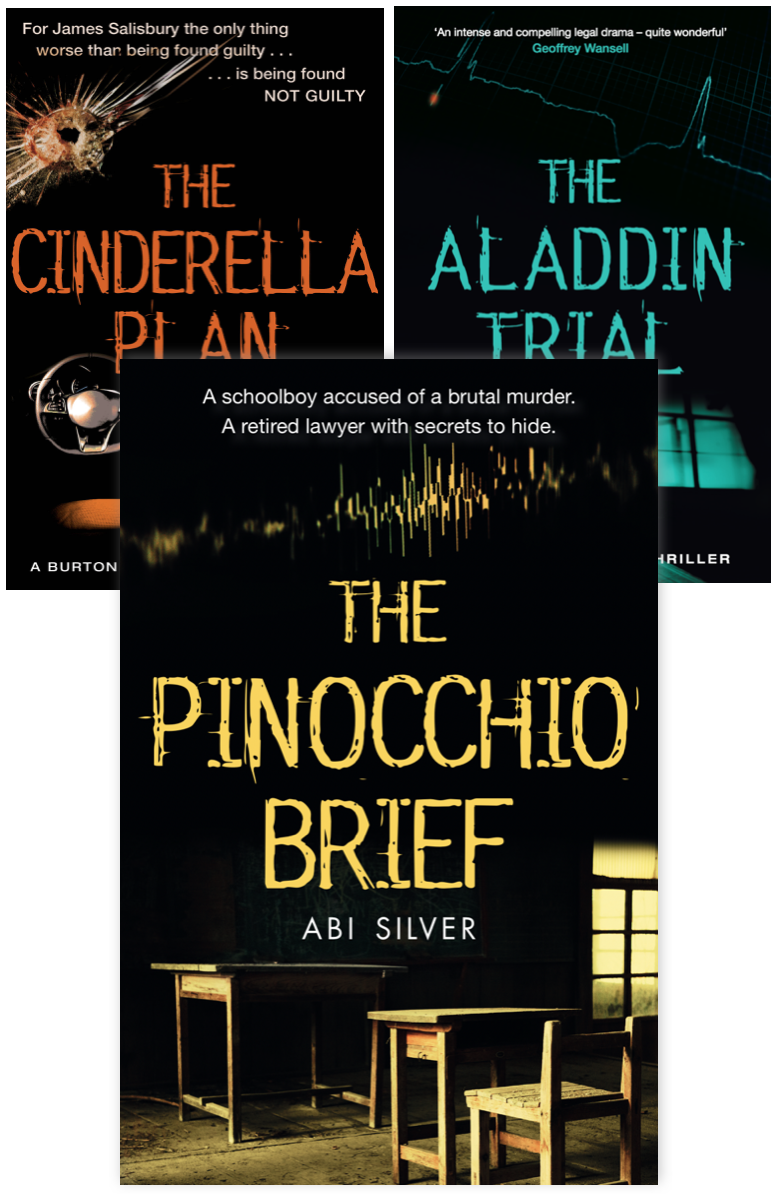 Three paperbacks for the price of two

A 15-year-old schoolboy is accused of the brutal murder of one of his teachers. A new lie-detecting device, nicknamed Pinocchio, will be used during the trial. Is the accused, a troubled boy who loves challenges, trying to help his legal team or not?

When an elderly artist plunges one hundred feet to her death at a London hospital, the police sense foul play. The hospital cleaner, a Syrian refugee, is arrested for her murder. He protests his innocence, but why has he given the woman the story of Aladdin to read, and why does he shake uncontrollably in times of stress?

‘An intense and compelling legal drama – quite wonderful’ Geoffrey Wansell

James Salisbury, the owner of a British car manufacturer, ploughs his ‘self-drive’ car into a young family, with deadly consequences. Will the car’s ‘black box’ reveal what really happened or will the industry, poised to launch these products to an eager public, close ranks to cover things up?

‘Tense thriller wrought from a cutting-edge subject’ The Times

DISCOUNT CODES MAY NOT BE USED WITH THIS BUNDLE

“God, Raymond. You take everything so literally. Can’t you tell when someone is lying to you?”

Jamie said that to me after Physics this morning. Jamie is my friend, my best friend, my only friend, I think. We share a room. He touched my arm as he spoke, just a tap, a little above the elbow. I don’t like being touched. I’ve told him that before but I didn’t remind him this time. “Sometimes you have to accept things you don’t like because that’s how the world works.” That’s what mum said the day I came here.”

“God, Raymond. You take everything so literally. Can’t you tell when someone is lying to you?”

Jamie said that to me after Physics this morning. Jamie is my friend, my best friend, my only friend, I think. We share a room. He touched my arm as he spoke, just a tap, a little above the elbow. I don’t like being touched. I’ve told him that before but I didn’t remind him this time. “Sometimes you have to accept things you don’t like because that’s how the world works.” That’s what mum said the day I came here.

So I am trying, to accept things, that is, and I know he didn’t mean anything by it; just a bit of friendly emphasis. Touching my arm when he said it. And that’s just how the world works. In fact, I’m grateful now that he did because it made me remember what he said and I was looking for something new to pique my interest. And now I have it, the perfect topic to research: lying.

To Lie. Alternative words I could use: to tell untruths, to perjure oneself, to have somebody on, to fib, to tell stories, to be economical with the truth.

Dictionary definition? “To say something that is not true in a conscious effort to deceive somebody.”

I take to Google and enter the word “lie” and it prompts me on to various options. I choose “lie detection”. I immediately discover that some people claim they have a “sixth sense” which allows them to know when other people are lying. The Chief Constable of Wandsworth, Chief Constable Sidley, said that on the 10 o’clock news only yesterday.

“I always know when they’re lying. It’s my sixth sense,” he said and nodded solemnly at the camera. I don’t believe him. If it were an animal (not a human – I know humans are animals) then I might understand it. The way that those Medical Detection Dogs can sniff out cancer cells or that Cricetomys gambianus, the African giant pouched rat, can find land mines in Tanzania. If someone told me a pig knew when a person was lying then I might believe that, but not Chief Constable Sidley.

That stuff doesn’t really interest me, though; hunch, premonition, gut feeling. I want to find out how you know when someone is lying, really know, not just guess or suspect. Not surprisingly, there is lots of literature on the subject.

My last time-filler was Jupiter, anything and everything to know about Jupiter. My favourite fact about Jupiter is that its dust clouds are made up of ammonia and sulphur. The smell must be awful. Except that humans can’t just go there and smell it. It’s -145°C on the way in and then rises steadily as you get closer to the surface, so we would probably be dead before we smelt anything at all, of course.

My second favourite fact about Jupiter is that the Great Red Spot, a storm covering an area three times larger than the Earth, has been raging for 350 years. Imagine that, a fire burning for generations with no one to put it out.

Yes, Jupiter occupied me for around two months before I pretty much knew everything anyone had written. I sincerely hope that this will keep me busy for longer.

Perhaps I should introduce myself to you before I just delve in: Raymond Maynard, aged 15 years and 9 months, 3 days, 6 hours and 22 minutes. That felt a little strange because I don’t do it very often; tell people who I am, that is. I prefer to exist quietly, to take things in rather than spew them out. In fact, you are probably my first audience.

What do I look like? I am one metre 81 without my shoes. I think that’s tall although, of course, “tall” is a relative concept. “Gosh, he’s tall for his age”; that’s my first memory of anyone commenting on my height, from the lady behind the desk of the doctor’s surgery when I went to have my tonsils looked at. The doctor said that I would have to have them removed. And I have brown hair. That’s it, really.

And what do I like? What I like are facts, lots of them, especially if they have numbers attached to them. And I can remember them, all of them; the birthdays of all the boys in my class, the registration numbers of their parents’ cars from visiting days, the numbers in the bar code of a packet of Jaffa cakes.

So, in California, in the USA (did you know that more turkeys are raised in California than in any other US state?), they have developed a product which measures the magnetic activity in your brain. A scientist there says that when you lie, there is increased activity in the superior prefrontal, anterior cingulate gyri and the parietal cortex areas of the brain. He says this is because we are all naturally honest and so the brain has to work harder to suppress the truth. He claims 91.3% success. And to find out, all you have to do is set up an electromagnetic force around the skull of some willing participant, ask a few questions and watch what happens.

Again I’m not convinced; the research is based on the premise that humans are inherently honest. Is this really right? All humans? When Marnie said she hadn’t visited last week because she had a cold I knew that was a lie because I saw from her Facebook page that she was out at a party and she looked pretty fine in all the photos. I wouldn’t have minded if she’d just said. But that proves my point. If my sister lies so easily, then I’m sure other people do it all the time without it causing “extra brain activity”.

Voice Stress Analysis. That sounds more promising. Eighteen years of research have led to the conclusion that people’s voices sound different when they lie, and this time the researcher claims 93.4% success rates. Admirable. But this seems obvious to me and I am sure I could have worked it out in far less time.

What else is there? “A connection between lying and increased pupil size”, a “Facial Action Coding System” and also “how long it takes the subject to begin answering questions”. Liars take longer to begin speaking, apparently. The list of detection techniques is lengthy. This is going to keep me occupied for quite some time.”

From The Pinocchio Brief

‘A good read and an excellent first novel’

‘An ingenious and compelling whodunnit’

‘What wonderful characters! It’s great to see smart, successful women taking on the real hero role of a story. There isn’t anything I didn’t like about The Aladdin Trial. Smart, relevant, sensitive and immensely readable: an all-round brilliant book’

‘I suspect that the out-of-court component of their activities goes well beyond what you might hope for from your legal counsel, but it makes for great fiction, and the pair are quirky, independent-minded and abrasive enough to make them interesting’

‘Silver reunites Constance Lamb and Judith Burton in another assured display of crime writing. The cut and thrust of a murder trial makes for a compelling climax. Having hit on a winning formula, Silver sticks to it’

‘Topical, plausible... A book for the beach’

‘Who will be to blame in the event of an accident? The person inside the car? The car manufacturer itself? The software engineers? All these questions and more are bought into sharp focus by Abi Silver’

‘Was the man in the driving seat or the car itself responsible for the fatal accident? And is it the AI or the flaws of the humans involved in creating it that poses the greater danger? Tense thriller wrought from a cutting-edge subject’

‘Abi Silver has carved a niche exploring the moral and practical issues thrown up by technology, and how the law responds. She is adept at turning complex legal debate into compelling legal thrillers ...If The Cinderella Plan finds its way on to your holiday reading list, expect to deliver a favourable verdict’

‘More a whatdunnit than a whodunnit... it is a good story which discusses factual issues society will have to tackle. Previous books by the author have won well-deserved praise’

Would artificial intelligence put an end to miscarriages of justice or simply cause new problems? Ayo Onatade of the crime e-zine Shots looks at the ethical issues raised in The Pinocchio Brief.

Abi Silver assures Crime Time there is nothing far-fetched about the revolutionary lie-detection technology in The Pinocchio Brief.

Abi talks to her old law firm Allen & Overy about the transition from litigator to crime writer.

‘For me New Scientist magazine is often a catalyst...As for the legal input, I am a lawyer by profession, so I have truly taken the ‘write what you know’ mantra on board.’ Abi tells writing.ie about her research process.

Abi Silver was born in Leeds and is a lawyer by profession. She lives in Hertfordshire with her husband and three sons. Her first courtroom thriller featuring the legal duo Judith Burton and Constance Lamb, The Pinocchio Brief, was published by Lightning Books in 2017 and was shortlisted for the Waverton Good Read Award. Her follow-up The Aladdin Trial, featuring the same legal team, was published in 2018.

Read more about Abi and her work at www.abisilver.co.uk. 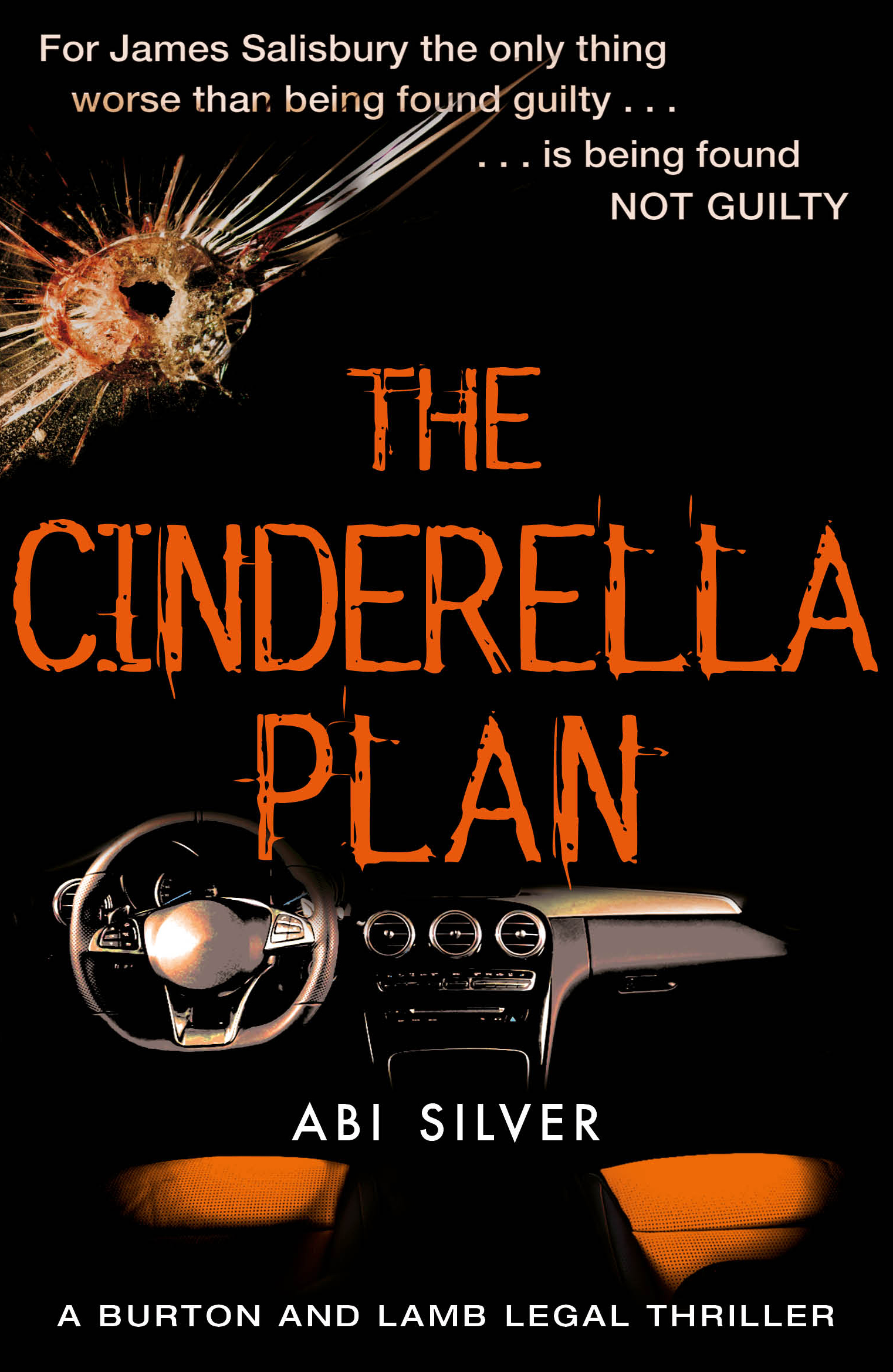 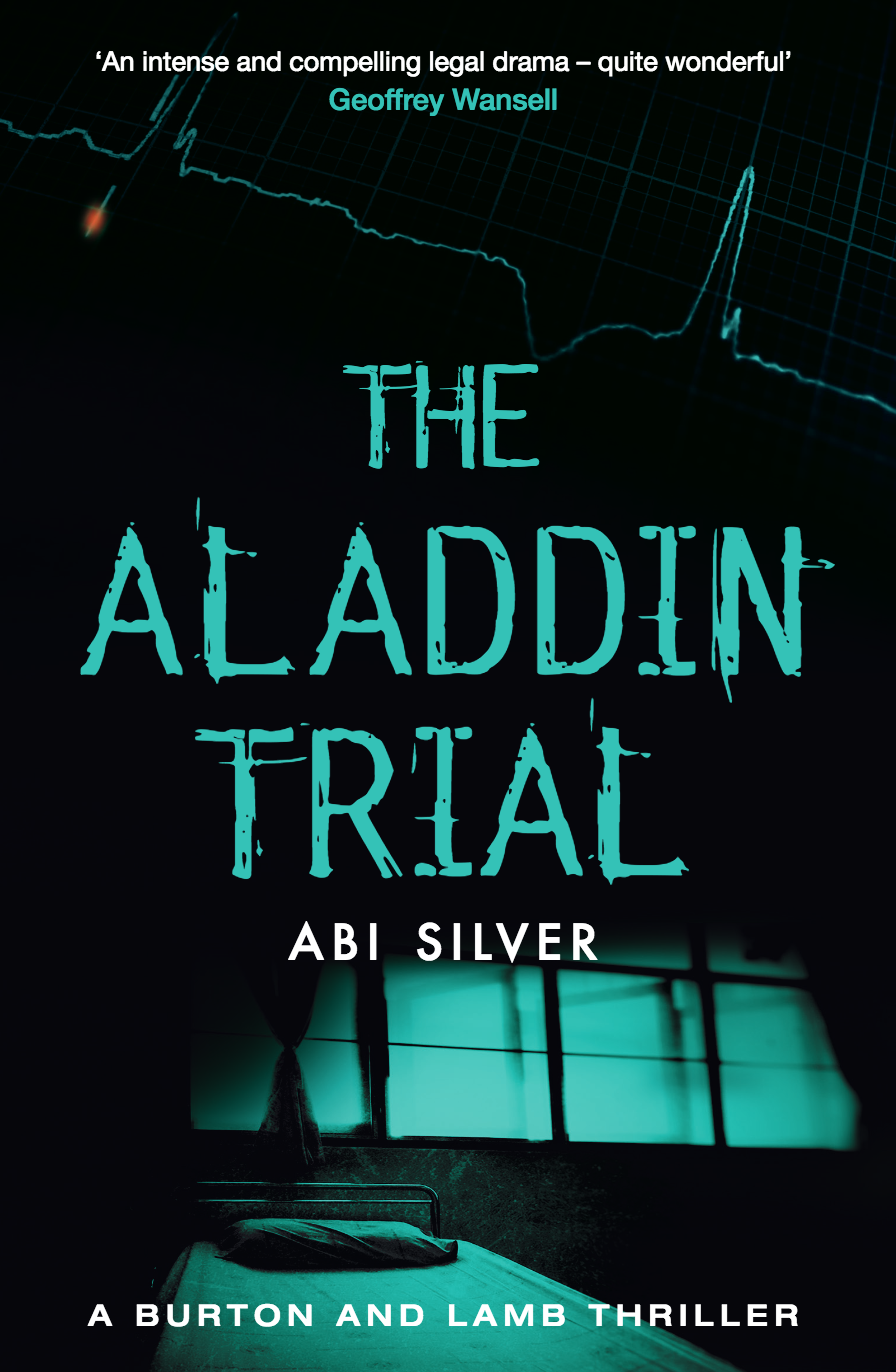